Following the opening of Bath Ales’ Hare Brewery in May, the team has been bedding in the new tour for visitors to the Warmley site, welcoming colleagues from across the business as well as local MP Chris Skidmore to give it the once over. And the verdict? A great big thumbs-up all round. 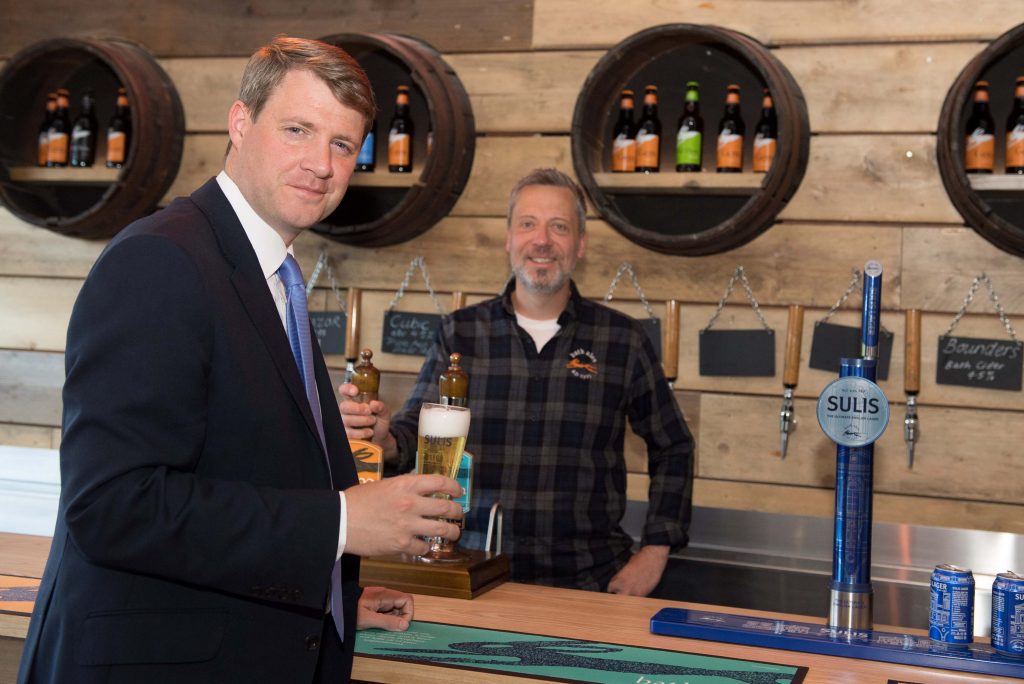 The new multi-million-pound brewhouse, which also features bottling and cask racking facilities, is one of the most technologically advanced brewing set-ups in the UK, with a capacity of over 50,000 brewers’ barrels ensuring locals pubs won’t ever run dry of Gem, Wild Hare, Barnsey or any other Bath Ales favourites.

Escorting Chris Skidmore around the new site, Operations Manager Mick Stawniczy said, “While we have got what is probably the most state of the art equipment in the country here in the brewhouse, we also think it’s a beautiful thing to look at, so we were thrilled when Chris asked to be shown around to give it his seal of approval.”

After a guided tour of the brewhouse and the bottling plant, Mr Skidmore was treated to a glass of Bath Ales’ Sulis lager, specially brewed to coincide with the opening of the Brewery, at the Brewery Tap in Hare House.

Commenting on the experience, Mr Skidmore said, “I am very proud to have such a fantastic ale produced locally in my constituency. Even if it is called Bath Ales it certainly puts Kingswood on the map and it great to see the company going from strength to strength. The new brewery has to be seen to be believed- not only will it benefit our local economy producing more than ever before, the visitor area is superb. I was really grateful for the opportunity to look around and see the investment that St Austell have made in Bath Ales- it is the perfect combination and I hope Bath Ales can also invest in local pubs as they have done so well in the past.”

But Chris Skidmore isn’t the only visitor to have been given special access all areas tours of the new site, as teams from across the St Austell Brewery and Bath Ales business have all been given the chance to come and have a look at the fruits of the company’s latest investment.

As Jon Kelley from St Austell’s Training and Development Centre put it, “With the exciting launch of the new Hare Brewery, we’ve been making sure that everyone across the company has the opportunity to familiarise themselves with our fantastic range of beers.  All of the pub teams across our managed estate have sampled and explored the characteristics of both the Bath Ales and St Austell Brewery range, comparing beer categories looking at the similarities and differences between our products, while focusing on our fantastic new products Sulis lager and Lansdown IPA.  Our Head Office teams have also joined us on some sampling sessions, to try out our new offerings.”

Senior Brewer Darren James was more than happy to show the teams around his new ‘toy’, talking them through all of the different stages of the brewing process before allowing them all to have a taste of the end product fresh from the fermentation vessels.

Buckley Cypher, Manager at the Wellington in Gloucester Road, Horfield, was one of the first to be taken on the tour, saying, “It’s such an amazing experience to see how everything is produced from grain to glass. The equipment here is just amazing and seeing the processes at work on the tour adds a whole new dimension when you taste the final product in the bar. It’s an amazing insight and even though we’re right at the other end of the process out in the pubs, coming here has made us all feel part of a much bigger team.”

Bath Ales tours are now open to the public on Thursdays at 6pm and on Saturdays at 2pm and can be booked in advance by calling 0117 947 4797.